I have a few forms which have checkboxes and radios in a table like grouping with a single label at the top and then columns of checkbox inputs.

So there is not a label beside each checkbox.

When the user pushes the tab key to move from checkbox to checkbox, there is not an indicator in the checkbox itself. So the user does not know which checkbox/radio is currently has focus.

Is there a way to do this? Will the next release add this functionality?

Yes, it will be added in the nex version.

I am using 3.6 and am looking for this functionality and I do not see it.

It would be nice if the radio/checkbox image had some sort of indication like a shadow effect or thicker border or something.

Hello again.
Plase, see this sample:
dhtmlx.com/docs/products/dht … radio.html
if you use ‘space’ key to overhaul items - text of items comes in blue. It is ‘focus’ event indication

we have such styles in terrace skin. actualy you are right, if not text some kind of indication needed for active checkbox/radio

I am testing by pressing the tab key multiple times, the label of the checkbox/radio does turn from black to blue, which is great. The checkbox itself does is unchanged.

The problem is I have a lot of checkboxes that do not have a label.

So when the tab key is pressed multiple times to advance to next checkbox, there is not an indication as to which has the focus. 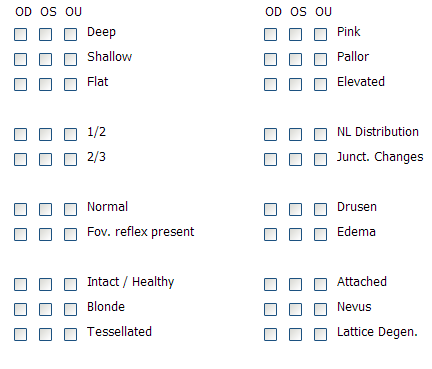 This looks great. Amazingly great. Thank you helping. With this update and the onKeyDown update, my forms work exactly as I hoped. Great job. Dhtmlx and the support is 1st class.

I will need to contact support because I was provided with a Suite update a few days ago and only have the complied js file, so I cannot use lib compiler to merge in this update into the new Suite.

I tested in the standalone version and it’s perfect.

Thank you for your kind words!!!
We’re happy to know that you like our product and services