I have been trying for about a week now to do something that i though was rather simple but i am having a difficult time implementing it. What i would like is when a new window is created from clicking a link, when a user clicks on the minimize button, it makes the top bar and window as small as possible and bring it to the bottom of the page. kind of like in windows or linux when you minimize something, it brings it to the task bar. how can i do this please…here is the code for my new window creation


there is not built-in method to do that. But the component provides the setPosition method that can be used in this case dhtmlx.com/dhxdocs/doku.php?id=d … l_denymove

You can try to use setDimension method to decrease window size:

I have the exactly same requirement in my application.

I tried with the suggested approach of using setPosition() & setDimension().

For this, i tried to cache the size & position of the window which could be used when the window is popup again.

Now, i face the following problems:

Could you please suggest some solution for this scenario?

the API for getDimension() is returning the incorrect size. Its always returning the height as 30 irrespective of whatever i had specified while creation of the window.

getDimension always returns current window sizes and this is correct behavior. Height can be 30 if you’ve minimized a window.

Regarding control of parked windows - we don’t have such a sample as you’ve described.

Please find attached sample for the issue.
Whenever user parks up the window, the size when captured in the onWindowParkDown method returns the height as ‘30’ always, irrespective of the original size of the window. 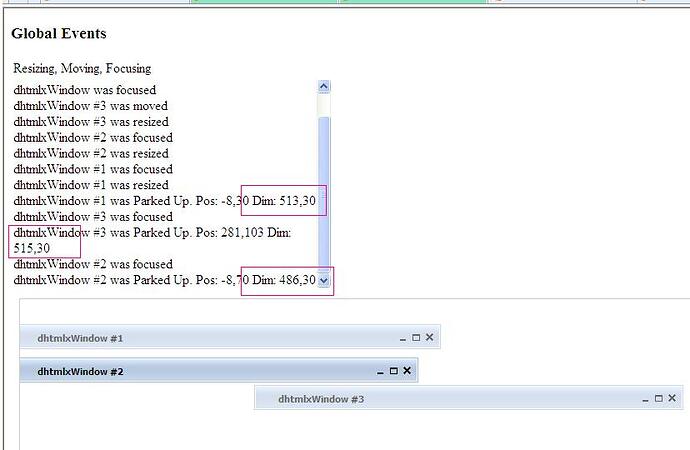 Hello,
when window is created, you pass some width and height into createWindow method. So, there is no need to use windows API to get original size:

When we open the window, user can resize of window & the new size will not be the same as by which we had opened it.

So, we need to get the new size (the size before the user clicked on parkup button) to which we need to restore the window back once user clicks on parkdown button.

So, is there any API/way to get the size of the window before the window was parkedUp.
I think, this variable will be available in Dhtmlx layer as the same variable wud be used when the user clicks on parkDown button.

So, could you please let me know the way to get that size?

the second call of park() method will restore the state of the window before parking:

If this solution for some reason doesn’t suit, you can try use lastParkH private property: