dhtmlXCombo & enableFilteringMode: Does not display results until the user types a char.

I was wondering if there is a way to force the dropdown on an XML loaded combo to show value before a char is type.

Please let me know if you have a solution for this or if it is even possible.


The first 3 combos are in filtering mode (the last two are loaded dinamically). These 3 combos show display all options in their lists if no character is typed.


Please explain the issue in detail

I would like a list to be returned if nothing is typed.  I have tried to load the list with all the items directly in html but the list take way to long to load because I have nearly 4000 records.

In order to prepopulate combo you can call loadXML method with a path to a script that returns the default options:

We have the same request/problem. Your last example does not work. The combobox remains always empty on load. We need to type a letter to get a list of autocomplete values. Your example triggers a XML content that we can see in Firebug console but does not populate the combo initial options.

What we want is to have an initial list when combo loads. Then when typing a new filtered list fro autocomplete is returned from PHP script.

Screenshot shows initial XML content loaded but not shown on combo. All your autocomplete/filtering options have same problem.

Is this a limitation or a bug? 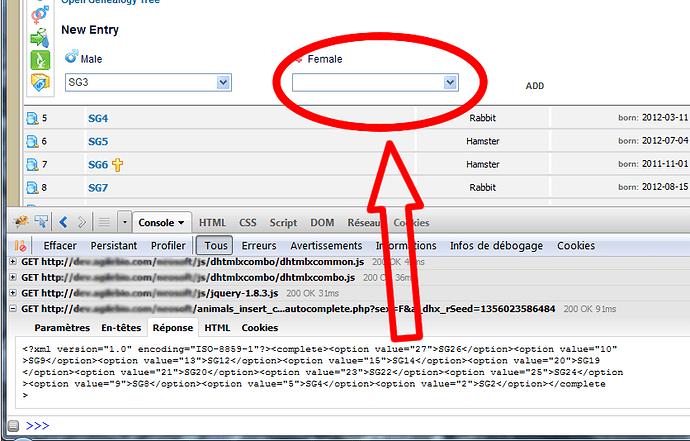 I’ve got the same problem.
Want to have initial list after page is loaded without typing any character.
Is there any solution???

try to load default set of options and enable filtering after a user start typing in combo input: