I’m working in an MVC application based loosely on your MVC tutorial but with heavy modifications to the controller. Everything seems to be working correctly except that when I create a recurring event, the event is given a class of “dhx_cal_event_line” instead of “dhx_cal_event_clear” resulting in the layout shown in the attached screen shot.

Any idea where we might look to try to fix this?

Thanks for your help! 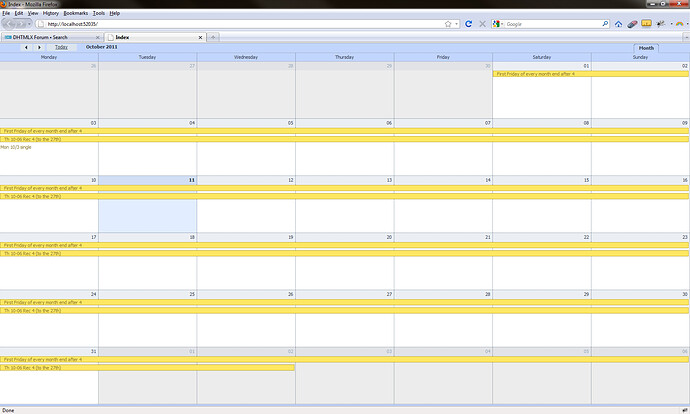 Such effect can occur if you are loading info about recurring events in scheduler, where scheduler_recurring.js is not included ( scheduler don’t know how to render recurring event, and renders it as long normal event )

Thanks for your response Stanislav. I really appreciate it.

I ran into this same behavior in the past when I forgot to include the dhtmlxscheduler_recurring.js but, unfortunately, it is included this time. Do you have any other places I could look for what might be causing this?

I just wanted to let you know this is resolved. I’m not sure what I did but it’s working.

Thanks again. These really are some of the best components available.