Guoup by by User, but still keep the project/task tree

I’m new to dhtmlxGantt, well, at my first glance, it’s beautiful and has lots of interesting functionality, I want to use it in my new project.
please refer to the attached screenshot for what I’m expected, in a few words,I want to it’s grouped by User at the top level, but still keep the project /task tree structure, I know it’s acceptable to have some redundant data, can someone give me some hints?
Thanks very mcuh. 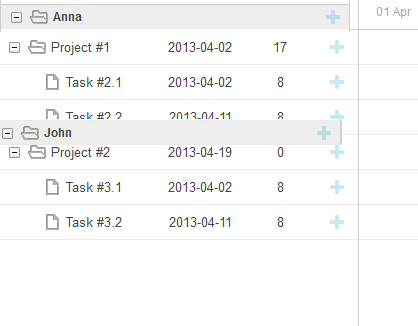 Hello,
if I understand you correct, you want to add an extra root level to the gantt tree - group items, and then split the existing tree between these groups, keeping the hierarchy?

Currently there is no ready method for this, but it can be done either via public API, or by extending the existing ‘group_tasks’ extension.
A small question regarding the feature, the grouping may create gaps in tree hierarchy, how the tree should look that case?
Please consider an example (dashes here shows the level of indent) :

What should happen when a task in the middle of a branch are going to another group than it’s child/parent items?
If we keep the visible hierarchy level, the extra indents or visible gaps may look strange in a real gantt:

Alternatively you could remove the extra indents :
Anna

But in case you keep the hierarchy because the type of task is depends on it’s level (e.g. project->phase->task->subtask hierarchy) this may create some issues.

In case we’ll be creating a demo, it’s not clear what is the expected behavior for such cases

Really appreciate your patient reply, sorry for the confusing due to not describing the question clearly.

now I want to group by these two person,below the tree structure in the capture.png is almost likely what I expected finally, currently as a workaround, I didn’t group the data, but add a top level(Anna and John) and copied the same project and project task data for each person, howerver, this is only for the demo.

Could you please give some advice if I can get that by using the Group function rather than the above method? 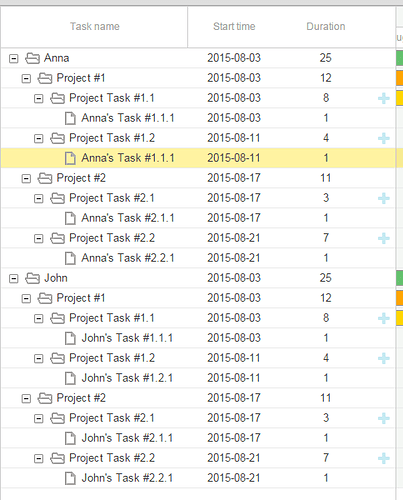