Odd behavior if an upload fails and you try again.

I’m brand new here but interested in trying this on my site. I was playing with the demo to see if it would meet my needs and noticed something odd. It’s not a huge thing. Doesn’t cause a crash. Just odd and probably should be looked at by a programmer when they have some time. 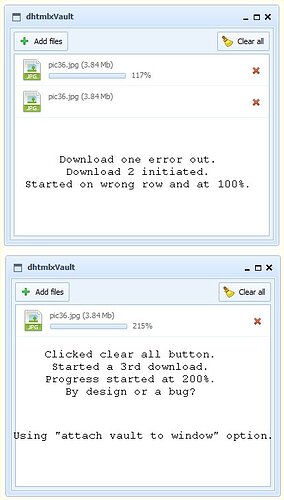 I made comments in the pics to show what’s going on. Again…this was the online demo which I would assume is the newest version available. I would think using the “clear all” button would start things over, but as you can see it did not.

I figure the file error was due to file size since smaller files worked fine, but there should be a way to clear info about the file or report the reason for the error so people don’t just keep trying because they think they did something wrong on their end.

I’m off to get the free version to see if I can get it running on Godaddy shared hosting. If that works then I’ll probably be getting the pro version since I really want the progress meter. Been searching for a solution for 2 days and this seems to be the best chance thus far.

Hello
We need completed demo to test the issue
docs.dhtmlx.com/auxiliary_docs__ … pport.html
Please, provide it to us on support@dhtmlx.com with a link to this topic.
We need to inspect it to help you

You have it. I was using the demo on your site. I was looking for a script that would suit my needs so I was playing with demos of different scripts as I found them. This was yours.

This is the demo I was trying.

What browser and OS version you use? What language and time zone is on your computer?

I tested the same situation with different browsers to see what they did.

Hope this info helps you.

This isn’t an issue that crashes the script and it doesn’t really cause problems beyond being confusing for the end user. It doesn’t report what went wrong with the upload (by design), but trying again would be a natural response by an end user after an error and that’s where the confusion happens. I just thought you would like to know about it. You can’t fix something if you don’t know it’s broken.

Thank you for this info! We will inspecting this issue

One more question: what vault mode do you have? To get it you need to call alert(myVault.conf.engine) after vault init